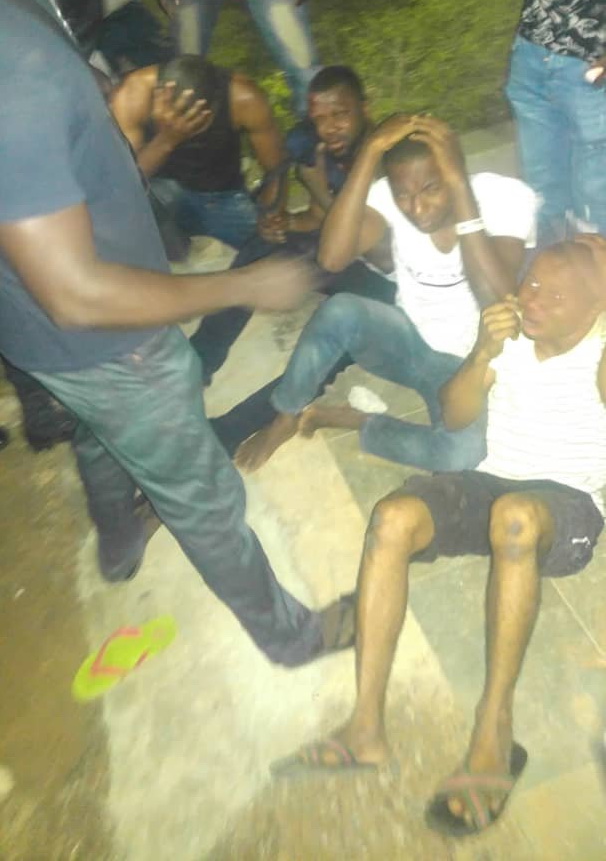 Giving details of events leading to the arrest, Inspector Kwabena Danso, a deputy Public Relations Officer at the Command said on Joy FM’s Super Morning Show that the domestic servant was on Monday rescued by the police when they got information that he was being assaulted.

He said, after releasing the assailants on bail and granting them custody of their ‘house help’ they went back to assaulting him.

Four Nigerians on Tuesday allegedly subjected their Ghanaian domestic help to severe pain, leading to disfiguring of the body of the victim.

Joy News’ Latif Iddrisu reports that the victim’s head had increased to about twice its original size, due to swells as a result of incessant hitting.

According to a good Samaritan, Shaibu Abubakar, who rescued the victim at East Legon, the piercing cry of the victim while being pummeled aroused his curiosity to approach the scene.

“We heard the victim crying out saying ‘this evening they are going to bury me in a septic tank.’

“When we rescued the boy his head was like the head of three of us put together. And his arm had become like those of four people put together.

“They had beaten him so much. What the Nigerians have done today? The Samaritan narrated to Latiff Iddrisu.

However, attempts to gain access to the specific residence was met with intense resistance from Nigerian occupants of the house.

According to them, Shaibu Abubakar was interfering in a very private matter. In the ensuing melee, he sustained bottle cut wounds in his palm.

But he was unfazed.

Shaibu Abubakar, the Samaritan pointing to his cuts

Mobilisation of community members led to overpowering the Nigerian captors who had exacted enough punishment on their victim.

The victim in chains

Recounting the incidents from the perspective of the Police on Wednesday, September 11, Inspector Danso said on Monday, police had “a distress call from in and around Trassacco that there was a fight in a house located on plot number 17.”

Some of the Nigerians who assaulted the Ghanaian

A dispatched patrol team to the scene arrested four suspects.

He said interrogations at the East Legon police station, however, revealed that the domestic help had been accused by mother of his masters of stealing her GH¢5,000..

According to the Deputy Police PRO “thorough investigations proved that the boys knew nothing about the money that was missing.”

The police, therefore, released him to his masters to be taken home.

Not satisfied with the police action, the suspects then took the law into their own hands and forced a confession from the “innocent domestic help.”

According to the police account, the assailants did these by torturing the victims, including chaining him and locking him up in a toilet after incessant pummeling.

The four Nigerians are currently in police custody assisting with investigations.

The swollen face of the victim

PrevPreviousRules for having s3x in your parents’ house
NextRanking: Popular TV host names 5 powerful ministers who must be axed by Akufo-Addo [Video]Next